What is a craft beer?

In the past, I had always found beer ‘heavy’ and very filling and would feel bloated post drink. But now with the huge range of interesting craft beers made with the different styles of hops, barley and infusions of fruit, I have been enjoying many a glass.

What is craft beer?

So what is craft beer? I have read on a US Craft Beer site that an American craft brewery is defined as small with annual production of 6 million barrels of beer or less. Also it has to be independent. “Apparently less than 25 percent of the craft brewery is owned or controlled (or equivalent economic interest) by a beverage alcohol industry member that is not itself a craft brewer.” But there are larger breweries who are making craft beer who are no longer independent and with the popularity of craft beer no doubt production could increase. 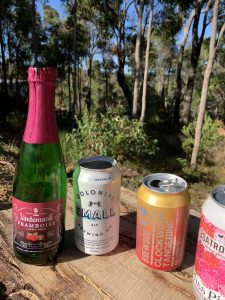 In any case, I feel for me that a craft beer is made with passion, with flavours and aromas that I enjoy and can detect. Craft beers are made by brewers who are innovative and looking to push boundaries and make some exciting new styles of beers as well as make great quality Session Ales, IPAs and NEIPAS. Today some craft beers are infused with fruits like grapefruit and orange which are so zesty and seem to dance on the palate. There are the fruit Lambic beers (Lindemans was set up in Belgium in 1822) that are sweet yet balanced. Click here to find out more about Lambic beers . Small and large breweries are making refreshing and tasty beers with a passion to keep being innovative and trialling new recipes.

I also like the fact that many craft beers are in cans. Not only are they light to carry (great for camping), they don’t shatter like glass, can be recycled and keep the beer cool. Plus with the can closure, it means no sunlight can get in and avoids ruining the beer. And the graphics is not limited to a label but to the full space on the can.

Last month I was in Perth and was able to try a range of tasty and interesting craft beers.

There is plenty more great craft beer out there. I love the passion of the brewers. Nothing beats meeting them and understanding what they are looking to make in each of their beers.

At the time of posting, these beers were available to buy at Swanbourne Cellars, in Perth WA.

Posted in: Latest News and Information